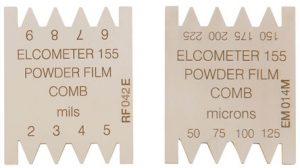 
The Elcometer 155 Uncured Powder Film Comb is designed to measure uncured powder coating film thickness. This enables the application system to be set up and fine tuned prior to the curing process. In turn, this will reduce the amount of scrap and over-spray.

Place the comb into the powder and slide the comb along the surface. The measurement points (or teeth) are pointed and allow the powder to flow around them.

Note: The thickness of a coating prior to cure is not the same value after curing but there is a correlation. The powder comb is suitable as a guide only.

The Elcometer 155 Uncured Powder Film Comb can be used in accordance with:

Elcometer 155 Uncured Powder Film Comb can be used in accordance with:

The use of powder to coat a product has, up until now, one drawback – the ability to measure the uncured powder thickness.

With a wet film comb, the comb is placed perpendicular to the coating and removed, and the thickness read. With a powder, this technique cannot be used as the powder would simply be crushed thereby making the test meaningless as it is necessary to have the two end teeth touching the substrate.

To this end, the Elcometer 155 Uncured Powder Comb, is placed perpendicular to the coating and drawn across the surface – thereby generating lines in the powder where the comb teeth touch it.